Guys, I love Brooklyn. If someone had asked me when I first moved to the city if I’d move to Brooklyn, I’d look at you with my shadiest look and then proclaim, um NO. Manhattan is life. Well, now my tune has changed and I live in Brooklyn and I love it. I don’t actually miss Manhattan and you couldn’t pay me to live in Manhattan. Well, you could, actually. I have not won the lottery, so if you want to pay me to live in a swanky downtown apartment, I’ll do it. But until that day comes, I’ll keep living in and loving Brooklyn. And Brooklyn has cupcakes too, so there really no reason to leave.

Before Brooklyn was cool, Park Slope was a happening spot. And home to a tiny bakery called Ladybird Bakery. Actually a little sister bakery to one of my favorites in the Upper East Side. Now that bakery has a killer chocolate cupcake. We’re talking perfect devilish chocolatey cake, extremely rich frosting, with chocolate ganache inside. It’s heavenly. But definitely not an everyday cupcake. More of an eat your feelings kind of cupcake. 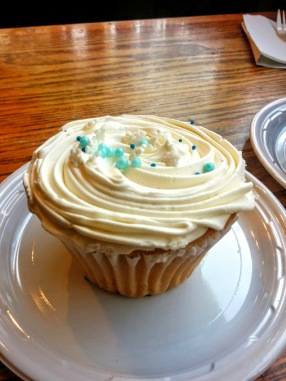 But the cupcakes from Ladybird Bakery are not those cupcakes. And man oh man. I wish they were. I was not impressed which makes my cupcake heart sad.

First, these cupcakes are huge. Double-sized, which I don’t object to, but it makes a difference. Since I brought a boy with me two cupcakes were tasted. I went with Brooklyn Blackout because chocolate is my actual boyfriend. It’s OK, he knows. And it really pains me to say that I was not feeling it. The solid cupcake mass was rock hard, which was due to being in a refrigerated case, so strike 1. The uberthick frosting was also rock solid, even though it was really good. Thick, chocolaty flavor, and creamy texture. Yes, very good. The cake itself was a bit crumbly, but had a very rich chocolate flavor. Not quite the most perfect chocolate flavor, but most definitely delicious. The element that really had me cringing was the chocolate pudding middle. Now, I’m a huge advocate of filling in cupcakes. But this pudding was too runny and caused the cupcake to just break apart into a hot mess of a cupcake. Ganache would have been a better choice, but alas. The cake:frosting ratio was acceptable. Overall, while the frosting and cake each had great flavors, the cupcake just wasn’t a piece unifying cupcake heaven.

The next cupcake we consumed was straight up Vanilla. Now vanilla and I have had our differences; I never thought there was much to vanilla. Kind of blah. But someone has been slowly changing my mind and I’m equal opportunity cupcake advocate. So I’m very accepting of a bomb-ass vanilla cupcake. But this is not one of those. This cake was overly dry, and lacked any flavor. Like eating corn bread. Except cornbread is better. The vanilla frosting had a subtle sweet flavor, but no traces of vanilla. I don’t discriminate against massive cupcakes, but at least I want some strong flavor and really good frosting. 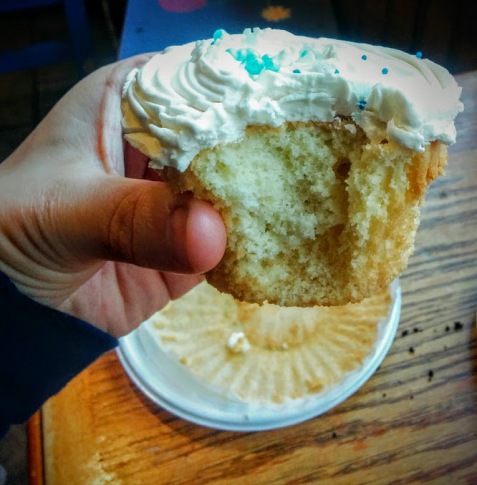