When I went to Belize I immediately fell in love with everything there.  Fresh fish all the time.  The clearest, most refreshing water ever.  Scorching hot sand underneath my feet — yes.  It feels amazing.  Between snorkeling, hiking through ruins, and other Caribbean adventures, I had never been so relaxed.  Seriously.  Ask anyone who knows me what can make me relax.  Answer: trick question.  That’s impossible. 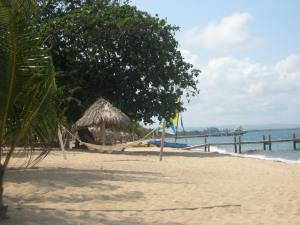 The secret ingredient of a Belizean getaway?  It’s gotta be the rum punch.  And THAT hammock  on the beach.  I’m not much of a mixed drink kind of girl, except for the weekly Gin & Tonic, but when in Belize, its gotta be rum punch.  So many days spent at the tiki bar sipping rum punch and feeling the stress leave my body.

Obviously the greatest combination of a stress-free treat is a rum punch cupcake.  It brings me back to my week in Belize and reminds me that summer isn’t quite over.  I decided to use a box mix, since I was in a time crunch to make these cupcakes for a party I was going to.  I’m not usually a big proponent of making anything from a box.  Alright, so it pretty much goes against all my baking instincts.  But there is totally no shame in doing so.  Especially if Belizean dark rum is mixed in.  I think I can get over it.  And you should too.  Pineapple-rum buttercream topped off with lime zest — my favorite kind of zest — really sends me back to that coastal paradise.  Which probably isn’t such a good thing because now I want to hop a plane to Belize immediately.  At least these cupcakes will serve as a quick fix for when I need a little vacation.  Which is all the time.  Thank god for that rum.